Home > News Pick > A flyover that had to collapse 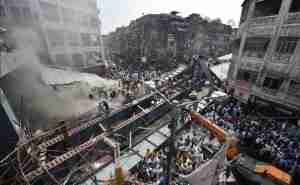 ‘Act of God’ may have sounded funny when Paresh Rawal uttered it dramatically in the movie OMG – Oh My God! But it certainly sounds shameful and irresponsible when you hear it as reason of the collapse of an under-construction, dumb- designed, long-delayed flyover in the chock-full market area in BurraBazar, north Kolkata. Our grief-stricken politicians and legislators have found the culprit – the opposition party.

Here are some facts about the flyover in question Vivekananda Road Flyover in North Kolkata near Ganesh Talkies (Girish Park) and its collapse.

So, the suspensions are being done, detentions are taking place, rescue operations are being carried on and so does the task of making hundred other flyovers. Experts believe that flyovers, which are meant to solve traffic problems mostly fail to do so. More often than not, flyovers mainly shift the point of traffic congestion, become a source of corruption and in some cases become a reason for death of innocents, like in this one.