Home > Stories > A story of hope and charity 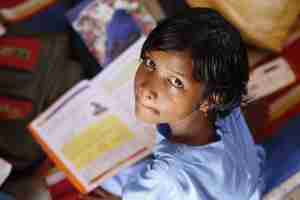 Do you do Charity? If yes, what does it mean to you – a chance to brighten up lives or just an act of redemption?

Rakshanda is a teacher at JVN International School, an esteemed school in her area. She figures high in the students’ list of favourite teachers. Due to her goodwill and popularity amongst students she gets a lot of tuition offers from her school students but she turns down them all because she knows that accepting those might create scepticism towards her otherwise fair and square teaching practises.

Apart from teaching, she also pursues a degree course in psychology, entirely different from the subject she teaches at school – Physics. She had enrolled in it for her love for human psychology. All this leaves her super busy. But amidst her already busy routine Rakshanda wants to accommodate two more things – learning Kathak and tutoring underprivileged children.

Rakshanda is amongst those God-fearing people who are always thankful to God for giving them a blessed life. She believes that she must contribute to the society in some way or the other. And what could be better than educating the needy. She is proud of and thankful to her parents for inculcating in her such values.

Soon, she started teaching the nearby slum children. And almost a week later enrolled herself into the new Kathak class that was inaugurated lately in the nearby commercial complex.

Initially, she was more zealous about the coaching classes but gradually her love for Kathak started to take over.  It was then that her coaching classes turned into a mere formality. Had the children been of her school or some other reputed school there would have been pressure on her of the performance of the children in school or their ranks in competitive exams. But since her tuition students had just one competition and that’s poverty, everything else was a privilege to them, be it an indifferent teacher. They felt lucky that at least they had a teacher. Quite obviously, the children or their guardians did not, could not ask for more.

Rakshanda’s passion for Kathak and her indifference for the classes continued to increase until one day when Lakshmi, the mother of a child, Chhaya, from the coaching class came to Rakshanda with a bag full of bottle gourds. The tuition students had just left and Rakshanda was about to go to get ready for the Kathak training when she saw Lakshmi standing at the door. “Yes?” enquired Rakshanda. “Madam, I am Chhaya’s mother. I came in to meet you and….” Rakshanda didn’t wait for Lakshmi to complete and while taking out her clothes from the wardrobe said in a stern voice, “We’ll talk later.. .probably on Sunday. Right now I’ve to go somewhere” and she went into the changing room. Lakshmi kept the bottle gourds on the side table and left.

When Rakshanda came back home after the Kathak class and found the bottle gourds in her room, she went to her mom and asked about it. Her mother replied, “Lakshmi, Mrs. Mehra’s maid brought these for you from the fields. She had come to express her gratitude for you. She said that she never wanted her daughter Chhaya to be an illiterate maid like herself. She wants Chhaya to be a teacher. She said that people would laugh at her when she shared her dream for her daughter but now that you are coaching her daughter she’s all hopeful that one day Chhaya would become like you. Now when someone mocks at her she says that Rakshanda mam of JVN Intertaional teaches her daughter. She also said that she has started doing extra work at a field to save money for her daughter’s higher studies. I could see hope, light and gratitude in her eyes. She even touched my feet and gave a lot of blessings to you. I am proud of you Rakshu. You know you’ve always made us proud and we love you for that but for this we respect you Rakshu. Keep it up. Keep lighting up people’s lives.” Rakshanda’s mom kissed her and left.

Rakshanda couldn’t say anything. She immersed in guilt and felt hollow as she realised of late she was not being honest with her tuition students. She had started off her tuition classes to make a difference in the lives of those ill-fated children but it soon turned into a mere act of redemption. She realised that she might be doing just another charitable service that made her feel good about herself but the students in her tuition class and their parents had already started weaving dreams of a better future.