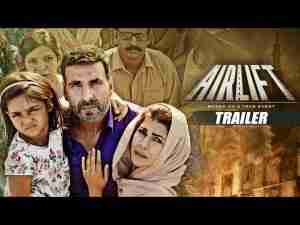 One thing I want to make clear at the start itself that I am not going to dissect this movie with the knives of technicalities and perfection. Because situations cannot be perfect, reactions cannot be perfect neither could be emotions nor history itself. What you are going to read further is not a review basically, it’s an accolade that the film deserves and so does the story of real heroes behind it.

This movie has come around the time of the biggest festival of Indian democracy – Indian Republic Day.  And as being advertised in its promotions as well, it gives all of us many proud-to-be-an-Indian moments. After watching the movie you will be proud of Air India which proudly conducted the world’s biggest air evacuation mission ever, our dutiful officers because of whom Air India could reach our fellow Indians in Iraq and the real-life, unsung heroes Mr. Matthews and Mr. Vedi who saved the lives of lakhs of Indians.

In the 1990s, when Iraq invaded Kuwait, as many as 1,70,000 Indians were rendered homeless, moneyless, foodless and most importantly clueless about what to do and how to do. Even the ones like Ranjit Katyal (Akshay), a topnotch, shrewd businessman who had contacts with other business tycoons and politicians were reduced to being trivial people because there was no government or law left in Kuwait. Dictatorship of Iraqi army prevailed; and it’s shown to be the army of Iraqi teenagers who were given guns and labelled soldiers. People of servant ranks were promoted to being Majors (Major Khalaf Bin Zayd) of such an army. Such an army would not only kill people on command but would also plunder, rape and take sadistic pleasures in threatening people and mocking at their miseries.

The films gives a panoramic view of the lives displaced with the help of the characters played by Purab Kohli, Kaizad Kotwal and others. Not even the smallest of characters in the film is indispensable. The one and only Akshay Kumar will make you craving more of him with his flawless performance. Nimrat is elegant and natural. Had it not been for Nimrat, there would not have been a single dialogue of some other ornamental female lead. But since it was Nimrat, her character only brings out the best in Ranjit Katyal.

The film is a must watch for everyone. It has moments of grandeur like when the Indian flag is raised at the Amman airport. It has a couple of quick doses of humor amidst all its seriousness. But yes, if some of you find the song sequences redundant, then look around and you’ll find some people tapping or whistling to them so there’s something for every kind of movie lover.