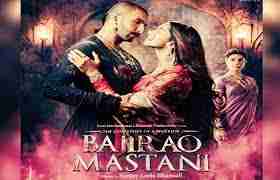 I had to watch BajiRao Mastani much earlier but couldn’t do it due to all the preoccupations that the contemporary busy and fast life throws at you. I had all kinds of reviews available before going to the theatre, but I chose not to read any and went with a neutral mind set. However, before I started writing the review I did go through some of the reviews for borrowing criticism because I had a majorly positive feedback to give. Following are my observations.

The movie was basically criticised for three things: 1. distorted historical facts, 2. sporadic songs 3.and grandeur. Well, the historical facts argument can be taken care of by the disclaimer. As the reviewer Shubhra Gupta also puts, “it doesn’t even pretend to be a faithful document of the events that took place in the early 1700s, when the Maratha empire in its ascendency.” Sporadic songs, yeah, I particularly felt for the song ‘Pinga’ that it was included just to have a déjà vu effect of ‘dola re dola.’ Grandeur, yes it was there in abundance but how else most people would like to view the life of ageless Kings, Queens or a Peshwa, which means prime minister.

The movie is grand, typical of those directed by Sanjay Leela Bhansali. The cast is just apt. We have a lead pair that could very well be called the director’s most preferred after their rocking chemistry in the trio’s last ‘Ram-Leela.’ However, when you watch Bajiro Mastani you yourself would find Ranveer and Deepika indispensable as Bajiro and Mastani respectively.

Whenever I watched Ranveer in fight sequences or romancing his beloved, or arguing with his family over his cross-cultural love affair, or intimidating the Nizam of Hydrabad or in the song ‘Malhari,’‘I exclaimed ‘only Ranveer has that madness, energy and conviction needed for the portrayal of Bajirao.’ Deepika has once again cast that magic spell on her viewers that she had learned to do with her debut film. Or, maybe she inherently has that light and attraction needed to illuminate the character of Mastani. To experience it, you have to watch her dance to the famous ‘Mastani ho gayi’ or fighting with vigor and vitality particularly in the scene where she as Mastani was carrying her small child with one hand and fighting with just one hand personifying a tigress that when hurt answers her enemies with all the more ferocity.

Priyanka, as her character Kashi, had a handful of simple and many mixed emotions to portray as a dutiful, caring and loving wife; she has done justice to her role. Her character was the only one, if we set aside Bajirao’s, who had the grace and compassion of accepting Mastani as Bajiro’s second wife but only as a part of her humanly duties. There’s a scene where Kashi welcomes Mastani in the Mastani mahal built by Bajirao for Mastani, since she wasn’t allowed to live with Bajiro’s biological and Hindu family at their ‘Shaniwar Wada,’ with the dialogue conveying that Mastani is welcomed in the ‘mahal’ but not inside her heart, rational too.

Milind Soman as one of the Peshwa ministers makes his presence felt in the entire movie with his subtle expressions but strong enough to make a mark. Especially mentionable is the sequence where the Peshwa relinquishes his throne (after continually failing to convince his family to accept his Muslim beloved and to stop all the plotting against her, Peshwa decides to surrenders his status and put across that, if they want him they’ll have to accept Mastani as well) under the influence of alcohol. Milind as a minister dares to speak authoritatively to the Peshwa and reminds him of how binding it is for the Peshwa to fight for his province, his country and his people. Peshwa cannot quit in between because it’ll waste all the efforts and sacrifices put in by not only the Peshwa, but by his warriors and ministers as well. Milind performing on this is like he’s telling the world that he’s right here. Peshwa agrees because for him too ‘rashtra bhakti and rashtra dharm’ comes first.

Vaibbhav Tatwawdi, as Chimaji Appa, is a promising discovery and the beautiful and talented Tanvi Azmi adopted the bald look for the movie which only adds to her already bold and convincing act.

Movie takes us to the journey of Pune and Marathe empire of the 1700s but we get to know that ‘varna’ and religion are the two elements that were present then, are present even today and have always been irrespective of any given time in the history. The reason that Bajirao and Mastani couldn’t live happily together as man and wife was the same for which the likes of the movies PK or OMG were criticised – that they supposedly messed up with the ‘Dharma.’

Next is Karma. These Kings and Peshwas and people on great posts have such onerous social and political obligation

s that their personal preferences have to go through the litmus test of the reaction of the society and their impact thereon, failing which their personal choices would become a crime and in most cases would prove to be fatal.

No matter how evolved we human beings, that supreme species of living beings, are but it seems we’ve entangled our lives with caste and religion without really understanding them, or so it seems.