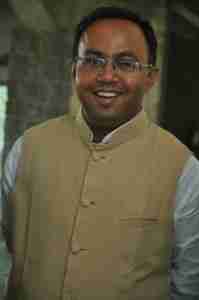 What does WHO has to say about cervical cancer

The 12 December 2013 press release of the WHO mentions, “With 5,28,000 new cases every year, cervical cancer is the fourth most common cancer affecting women worldwide, after breast, colorectal, and lung cancers; it is most notable in the lower resource countries of sub-Saharan Africa. It is also the fourth most common cause of cancer deaths (266 000 deaths in 2012) in women worldwide. Almost 70% of the global burden falls in areas with lower levels of development, and more than one fifth of all new cases are diagnosed in India.” Dr. Freddie Bray’s from WHO’s section of cancer surveillance had said, “India accounts for one-fourth of all cervical cancer deaths in the world. India has to do something to reduce this figure.”

What does the Tata Memorial Hospital has to say?

At a conference observing the platinum jubilee of India’s prime institute of cancer care, Tata Memorial Hospital, several international oncologists endorsed the use of cervical cancer vaccine. It is believed that around 70,000 Indian women are killed annually due to cervical cancer making it second most common cancer (after breast cancer).

Tata Memorial Hospital director Dr. Rajendra Bhadwe says that incidences of cervical cancer in a metro city like Mumbai are 8 per 100000 population, whereas in rural areas it’s 30 per 100000. According to him the difference in this ratio was due to education, availability of running water and bathrooms.

What is cervical cancer? 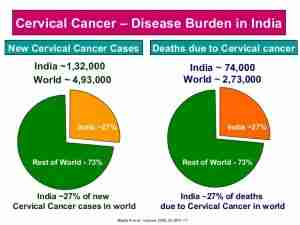 Wikipedia defines Cervical cancer as “a cancer arising from the cervix. It is due to the abnormal growth of cells that have the ability to invade or spread to other parts of the body.”

Who are at risk?

Women in general are at the risk; however, it most often occurs in women above 30 years of age.

What are the risk factors?

Human papilloma virus (HPV) is the major cause of the main types of cervical cancer – squamous cell cancer and adenocarcinoma. Other risk factors include multiple sex partners, excessive use of contraceptive pills, smoking and weakened immune system.

What are the symptoms?

Who all does cervical cancer affect?

Cervical Cancer or any type of cancer can affect any body regardless of their social class and status. Manisha Koirala, Lisa Ray, Yuvraj Singh, Lance Armstrong are some of the famous celebrities who got affected with cancer and won the battle with the deadly disease. However, not all of the cancer patients are that lucky. Jade Goody, a famous English reality-television personality had lost her battle to cervical cancer and died in 2009 merely at the age of 27.

Then we have examples of those countless poor and anonymous people who die of cervical cancer because of lack of funds.

How could cervical cancer be prevented?

It could be prevented by vaccination and regular medical screening.

Vaccination: Gardasil and Cervarix are the two vaccines that can protect women from several strains of HPV. HPV vaccines may prevent up to 90% of cervical cancer and are given in 3 shots over 6 months. However, there is a section in society which believes that vaccinations do not work and can be dangerous. One argument against vaccinations is that they violate individual rights and religious principles. These arguments have reduced vaccination rates in certain communities resulting in outbreaks of preventable and sometimes fatal, childhood illnesses. On the other hand however, there have been enough medical and scientific evidences to establish the importance of vaccinations on the whole such as in the cases of small pox and polio.

Regular medical screening: Cervical is preventable and a regular medical screening through pap smear test is an effective tool for preventing it.  Women aged 21-65 years should undergo it every 3 years. It’s life-saving test that detects early signs of cervical cancer and thereby enhancing the chances of a successful treatment.