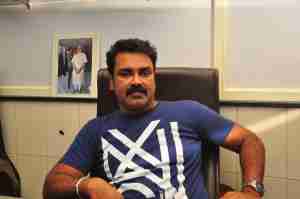 Recently, I went to Lonavala in off season which is why I missed the youthful, scenic beauty of nature there. However, what I discovered was equally or more special – nature’s miracle in the form of an artist, Sunilkandalloor. 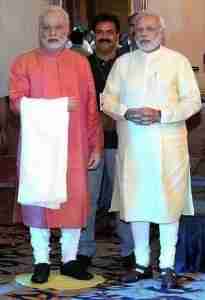 Sunil with PM Modi and the self-made wax model of Mr. Modi

Sunil is someone who’s made for us a mini Madame Tussauds, so to speak, right here in Lonavala. Madame Tussauds is the sole inspiration behind Sunil’s impeccable wax sculptures because other than that he hasn’t learnt the art of making wax sculptures from anywhere else. He is a self-taught wax model sculptor as there were no teachers for wax modelling in India when he decided to practice this art. He experimented to make wax models 17 years ago when he first made the bust size wax model of Lord Krishna. The very first human figure he made was of Mr. Karunakaran who was the Chief Minister of Kerela. So far, he has prepared several wax models of national and international leaders and celebrities.

Sunil’s Celebrity Wax Museum, Lonavala, Pune was established in 2010 and within a short span of time it became one of the main tourist attractions of Maharashtra. When in Lonavala, as tourists we’re recommended to visit Sunil’s Celebrity wax museum. Though, there was another wax museum adjacent our resort also but people said it wasn’t good enough. So it’s pretty clear that the word-of-mouth is in favour of Sunil’s. 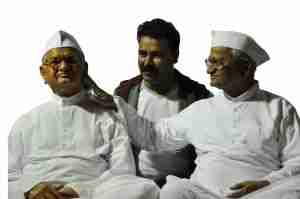 Sunil with Anna Hazare and his wax model

Sunil’s museum houses more than 70 wax models of very well-known celebrities and leaders around the world. Mr. Sunilkandalloor is the sculptor and managing director of this museum.

When we visited the museum, luckily enough Sunil’s brother was there from whom we got to know a lot about the Sunil, the artist, and his struggles. Though, we would have been luckier if Sunil himself was there. If not the best, getting information from the next of the kin was only next to the best. 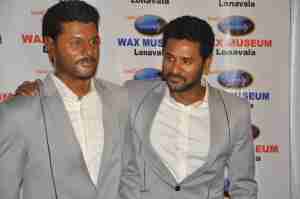 Prabhu Deva with his wax model made by Sunil

So here’s an excerpt of conversation with Subhash, Sunil’s brother.

Guftagoo: Tell us something about Sunil and the ‘Celebrity Wax Museum.’ From where has he learnt to make such wonderful wax sculptures?

Subhash: Sunil (42) is a diploma holder in fine arts for painting, drawing and designing. That diploma of his isn’t even for sculpturing. He hasn’t got any training of any sort in this art. It’s totally his hard work and talent. Madam Tussauds, which has the history of around 200 years is his source of inspiration. He wanted to do a related thing in India so he practiced and experimented for 2 years to get the hang of it and there he is! Evolving, improving and succeeding each passing day.

Guftagoo: Why did you chose Lonavala to open the museum?

Subhash: Actually, our main plan was to open a museum in Mumbai. But Mumbai is a costly place and it wasn’t not easy for us to directly start a museum there. Also, first we wanted to study the market as well so we chose Lonavala as we found it to be an ideal place located between Mumbai and Pune. 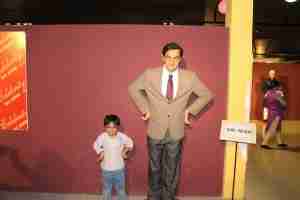 Child posing besides the wax model of Mr. Bean made by Sunil

Guftagoo: Is the museum building your own or rented one?

Subhash: It’s a rented place and costs us more than a lac per month.

Guftagoo: So you must have plans to own land for your museum.

Subhash: Of course we have plans. But we also expect and hope that some kind of governmental help should also be extended to us since Sunil is the first wax artist in India.

Guftagoo: Have you approached any official or minister for the help?

Subhash: We approached but haven’t yet received any. However, we have been assured by Modiji that he’ll allot us a space in Mumbai. We need recognition as a very few people know about our wax museum. It’s the first of a kind in India. I am hopeful that we’ll get due recognition and help under the ‘make in India’ drive. However, the news is that Madame Tussauds is going to come to Delhi in 2017.

Guftagoo: Why some models have better finishing than the others?

Subhash: Actually, the wax models we have is a collection of last 17 years. And the finesse is more in recent models. That shows the process of evolution of an artist. Models from Sunil’s training period are also included. Now he can make a model in 10 – 20 days. Earlier he took even up to 7 months to complete one model.

Guftagoo: If someone asks you sell models, will you sell if the price is appropriate? 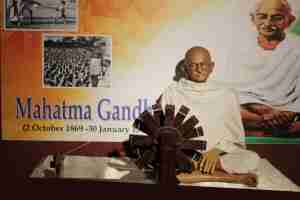 Wax statue of Gandhiji at Sunil’s

Subhash: We don’t sell models. We don’t want to. We want to expand our collection. Some people approach and demand for models but we deny. However, once we took the wax models of Anna Hazare and Bal Thakrey’s to their places and we got a wide coverage in the national press. That gave us the kind of publicity that we wouldn’t have managed to achieve on our own.

Guftagoo: What about the other wax museum – the Lonavala wax museum?

Subhash: You see they have given such an ambiguous and vague name – ‘Lonavala wax museum’ – which lacks ownership. It is fake and is cheating people by simply importing dolls from China and that too made out of rubber. We’re here for the last 7 years, whereas it’s been opened barely 4-6 months before.