We’re living in a world full of trust deficit. Either this ‘Kalyug’ has to be blamed or all of us – the ‘Kalyugions,’ for the lack of a better word or my lack of knowledge for the same. We’ve become cynical, which is a news generations old. And we have had reasons for the same. Fraud, dupery, treachery, trickery are omnipresent. Therefore, distrust and suspicion become our automatic and potent defence mechanism.

However, when this distrust starts affecting our intentions it might turn into a kind of gangrene for the human kind which has the collective shades of misanthropy and pessimism. One symptom of this blight may be trusting dog friends more than security personnel. Another symptom is mentioned in the following narrative of an instance where I thought I could raise funds for a needy family. I sincerely had confidence in myself and people around me but by the end of it I had raised more of self-doubt than funds for the lady. I don’t blame anyone but this what we are turning into is my concern.

In my life so far, I’ve got to know that there are two kinds of world – real and virtual. Real is our existence on this planet and virtual is our existence on the social media or in the world of our illusions. But yesterday I had been to another kind of world called the ‘awkward world.’ It wasn’t a willed or a planned trip, though. The journey started by my posting a charity message in the virtual WhatsApp groups.

Had I posted a lecture or a quotation on charity, it would have been well received with all kinds of applauses and smileys and icons and emoticons. Or had it been a joke like this:

“Mrs. And Mr. Bhagat were blessed with a baby girl. They decided to name her……..Mili Bhagat :)”

It would have made people my followers in groups.

But sadly, I posted a dud. 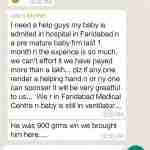 It was a sad message but more than the nature of the message it’s the attitude of people that made it sad. A message invoking ‘Financial Help,’ which in today’s world if you send someone chances are that people might treat you as the affluent classes used to treat the untouchables or they might send you to their list of the ‘blocked’ or the ones with a big heart might simply ignore it. And only then I realized I’ve so many big hearts around.

However, by posting that message I realised that I also have a couple of emotional fools in my 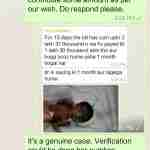 circle who actually responded. I felt like asking which part of your head allows you to react to such a message.  Don’t you know this is ‘Kalyug’ where everything you see is either a fraud or a potential fraud? But before I could ask so a sort of telepathy happened. One out of those two out of around 100 people who I know well actually thought of cross checking with me and asked, “Have you personally verified? Who is this lady asking for help?” I answered, “She is a mother who I came to know while writing an article on premature babies since she also have one. His baby has been on ventilator/incubator since the time he was born on February 14th  this year. Her husband is a reporter in a local Hindi newspaper and she’s a teacher in a small private school. So not very well-to-do.”

I gave those two curious souls the mobile number of the lady and address of the nursing home where her baby is being cured to verify for themselves. Don’t know whether they verified or not but they helped the lady instantly according to their capacity. One of them told me that she took it as an opportunity to do her share of charity. And there cannot be a better act of philanthropy than to help a needy pair of parents arrange medical care for their pre-term baby.

I felt all lost after posting that message. The burden of it was just too much to bear. It felt like I lost or annoyed all my ‘friends’ except for those two emotional fools. But who wants emotional fools over smart and practical people. I talked to my parents and told them I felt disappointed they told me not to be because you can’t and must not push people to do something for someone. You do what you want to do but don’t expect others to feel the way you feel. They are not wrong even if they choose not to help. They have their won reasons. I learnt a lesson. A big one.

Thank goodness! Just then a new joke came to my rescue. I posted that in all the groups and the series of applauds and smileys and lols and Rofls were back. I didn’t feel like being amongst the last three persons on the Earth: me and those two emotional fools who believed in doing charity and not merely virtually clapping on the messages lecturing about it.