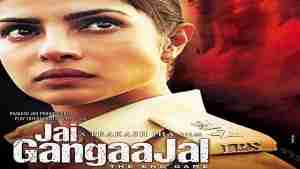 The movie deals with the issues like land mafias, sorry state of farmers, corrupt politicians and their hand-in-glove relations with broker-cops. The story is set in Bankipur, Bihar where the MLA of the constituency Bablu (Manav Kaul) and his brother Dabloo (Ninad Kamat) exploit the common people. They have an ambitious project of setting up a power plant in the area for which they need farmers’ lands and they don’t hesitate from looting, raping and even murdering farmers who resist. Police’s ‘circle babu’ B.N. Singh (Prakash Jha) facilitates the MLA and his brother in lieu of hefty bribes and riches. But with the posting of the new S.P. Abha Mathur (PC) in Bankipur, things don’t remain same.

Jai Gangaajal is more of an extension of Gangaajal than its next part. You’ll find the moments of Déjà vu galore in different elements from situations, to dialogues, to characters. What’s new? The performers.

It’s a delight to see PC as S.P. Abha Mathur but only when you get to see her. Her role may be that of the protagonist but you’ll see more of Prakash Jha than her. PC has proved her mettle as an actor not only in Bollywood but also in Hollywood so at most places she’s commendable as an honest cop. However, the standards raised by Mardaani’s Shivani Shivaji Rao as a new-age, tough female cop haven’t been reached let alone surpassed.

Prakash Jha, the director of the movie who has also done his acting debut through the movie is the one who’ll be seen most often. Jha plays the character of a corrupt circle officer B.N. Singh, who gradually undergoes the transformation and emerges as a khaki-respecting cop. He has a complex character with the shades of grey in it. And he performs better off when he’s required to talk only through dialogues and eyes rather than when he’s required to display his physical strength and vigour while beating up the goons. It is at this juncture, we realise the limitations that a director might sometime face as an actor.

The film runs for 2 hours 38 minutes, which couldn’t have been called long if it was released some years back. But blame it to the evolution of Hindi cinema that we are no longer feel comfortable sitting in a theatre for more than two hours unless we get to see an exceptional plot and storytelling like that of PK, may be.

The songs in the movie are well written and sung by the likes of Sukhwinder Singh, Udit Narayan, Richa Sharma and Keerti Sargathia and Arijit Singh but have mainly been reduced to background scores evoking satire and irony and boost action.