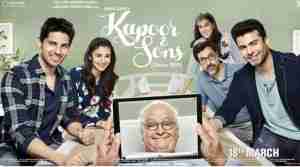 Coming back to the movie in question ‘Kapoor & Sons,’ it has a lot more real family than K3G. It has an effervescent 90-year-old Dadu (Rishi Kapoor), whose being in a wheelchair doesn’t bar him from lusting after Mandakini in a wet sari. It has a son Harsh (Rajat Kapoor) as an unfaithful husband with a burden of financial crisis. It has a daughter-in-law, Sunita (Ratna Pathak Shah) whose performance has shades ranging from angry edginess to calm grief. It has two grandsons: Rahul (Fawad Khan) and Arjun (Sid Malhotra) who are based in London and New Jersey respectively. While Rahul is the ‘perfect child’ of his parents, Arjun is more like the one who is never serious about anything. Then, it has Tia (Alia Bhatt) a manic pixie girl with a past tragedy.

The movie has yet another trademark of Dharma Productions – picturesque locations. Set in the beautiful hill town of Coonoor, Kapoor and Sons, is a heart-warming story of the Kapoor family. The story begins with Rahul and Arjun being called back home due to their Dadu suffering a heart attack.  Dadu’s most ardent wish is a family photograph with ‘Kapoor and Sons since 1921′ engraved on it, which will embrace the walls of his sprawling bungalow. Pretty simple and easy as Dadu’s wish might seem it washes away as Harsh dies in a truck accident.

As film critic Shubhra Gupta says: ‘Kapoor & Sons’ seems to have taken to heart that famous Tolstoy line: “all happy families are alike, each unhappy family is unhappy in its own way”, in the way it chooses a specific kind of unhappiness for each member of the Kapoor family.

Kapoor and Sons is the journey of the Kapoor family from this unhappiness to happiness. You have to watch it for yourself to know whether or not it attains that happiness. It has some powerful and enigmatic acting prowess shown by each and every actor. The movie has subtle touches, interesting dialogues and unforgettable music.

Basically, there’s nothing in the movie that masses and classes would not like. It’s a full-on family drama with arguing mom-dad, suspecting siblings, and a love triangle but with an element of freshness in it.