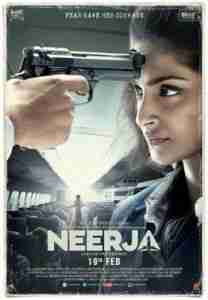 What is the essential ingredient of being a hero? It is the spirit to put before your life the lives of others who are not even related to you. Who’s a hero? The one who can do it. Neerja Bhanot could do it. Neerja bursted the stereotype that pretty faces are far from bravery and that courage and intent has to do with physical strength.

I often thank God for gifting me a day to do what my heart says and a night to sleep peacefully and safely. While we we’re busy in our routine lives there’s so much happening in the world outside. Exactly this is implied in the opening scene of the movie. On one hand, the effervescent, happy-go-lucky and loving 22-years-old Neerja is busy celebrating life as it comes, on the other hand the terrorists are busy manufacturing a hijack.

Neerja is shown to be a fan of Rajesh Khanna. In the initial couple of dialogues she is seen uttering the famous dialogue from his movie Anand, “Zindagi badi honi chahiye, lambi nahin.” We don’t know whether Neerja actually said this or not but yes she lived that.

Sonam Kapoor proves her mettle as an actor just as she has proved her class as a style icon. Shabana Azmi and Yogendra Tiku are flawless in the movie as Neerja’s parents, Rama and Harish respectively. You see them transitioning from doting parents to worried and frightened parents who are constantly wishing for her daughter’s life to the parents who break at the sight of their daughter’s bullet-ridden body in the coffin. The loss that they suffered is irreparable but their hearts, which are ever filled with love for their daughter, are filled with respect for their daughter who could have celebrated her 24th birthday but she instead preferred saving hundreds of lives while doing what she lost her life.

The performances of those who played the Libyan terrorists are flawless. Shekhar Ravjiani is seen for a very short time on screen to comment much but yes his cameo did add the cuteness quotient in the otherwise serious and deep movie.

Direction of Ram Madhvani is smooth. You could actually gauge the kind of terror the passengers of the Pan Am Flight 73 must have faced when hell broke loose on them. Back flashes are weaved seamlessly in the film. However, you might find the song, “Aisa kyun Maa” misplaced or not needed.

All in all, you would not find much time for bringing out trivial slip-ups here and there and the film will leave you teary eyed.

Go and watch for yourself the ordinary life and supreme sacrifice of Neerja Bhanot who was post humously decorated with the India’s highest peacetime military award for bravery, the Ashok Chakra, multiple awards for her courage from the United States government and the award called Tamgha-e-Insaniyat  (Order of Humanity) by, yes you read it right, the Pakistani government.