Home > Experiences > One of My Most Memorable Journeys 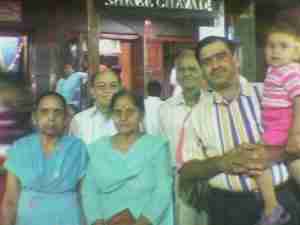 Just after cross-checking the confirmed train tickets with the chart available at the platform, I was quite happy that finally within few hours I would be at His Majesty’s (Sai Baba’s) place, Shirdi. This was the second time that I was able to get to Shirdi. The previous experience was also awesome with my two good friends, Manish Dhingra and Vimal Puri. During that trip, one of our friends, Uday Khatri could not accompany us due to unavoidable circumstances. However, this time, I had my family (parents, wife and son) along with me. Everyone was quite excited. It was their first visit to Shirdi. They were happy that I had additional role to play, the role of a guide.

Journey in Goa Express, right from Nizammudin Railway Station to Kopargaon (one of the nearest stations to Shirdi), was quite comfortable. We had co-passengers who too had planned to visit Shirdi. He retired from some Government department and had his wife along. It was their first visit to Shirdi. So, they were happy that they got nice companions in the train. As my father too had retired from Government service, he too had a great time with a person of almost same age group. Everyone liked the train, which arrived at right time (around 3.00 p.m.) at Nizammudin Railway Station and we reached Kopargaon around 11 a.m. the next day. We got an auto to Shirdi, the minute we checked out of the Kopargaon Railway Station. Once we reached our destination, we were told that either we could book our rooms in hotels nearby or we could book small or large rooms offered by the Sai Baba’s Trust at a very nominal amount. We all had experienced staying in hotels earlier, so this time everyone decided to go for the rooms provided by the Sai Baba’s Trust. Within two hours, we got the room booked and had the keys with us. Upon reaching, we found it was large enough to accommodate nine people and we were just seven. It was spacious, had three big windows, two cupboards and all basic amenities for a comfortable stay. Beds were also provided after depositing a refundable security amount. So, what more could have an individual asked for? The main temple complex was just 60 meters away from our room. We were lucky to get into the temple the same evening. Although, there was a huge line but we were blessed with His Majesty’s darshan within two hours. People just have to make sure that they are not visiting Sai Baba’s place on Thursdays, weekends or during vacations. This way people can avoid huge crowds at the place.
Just like hundreds of other devotees, we too offered prayers and flowers to Shri Sai Baba Ji. I was simply amazed; the atmosphere inside the temple was quite mesmerizing. People collectively recited shlokas, sang aartis and the chants were quite soothing. We were tired and hungry after seeing the museum and some other places near the temple, where Sai Baba used to meet the devotees. So, we headed for the Prasadalya that was about eight minutes’ walking distance from Sai Baba Ji’s temple.

We saw many people standing in queue just to get the Prasad at dinner time. After voluntarily offering some cash donations there, we found ourselves lucky to enter the huge main hall in the Prasadalya complex. It was just incredible inside. Everything was organized, clean and people were standing to help you out with the Prasad (meal). They had automated machines. Good quality sitting arrangement with live aarti from the Temple was being telecast through all the mounted LED TV sets of the hall. We could not believe that food was served to about one thousand people at one go. The waiting time was not over five minutes. I think that even a Five Star Hotel could not provide such an effective service at a place where people from all segments of society visit in huge numbers. All are treated equal here with no discrimination. The Prasad (meal) provided here is not only hygienic but quite delicious as well. It is available to everyone just for very small donation and those who are below poverty line can get it all for free and everyone can have it as much they need. The beauty of the place was that the environment was peaceful and everything appeared to be spellbinding. We just thanked Sai Baba Ji for his blessings. We felt happy as if we had been to heaven.

The next day, we offered some eatables to the poor and needy, as we felt that without following what Sai Baba Ji 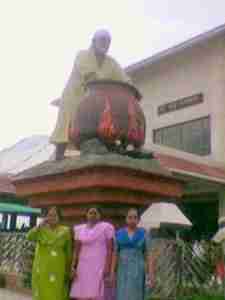 preached our journey would not have been truly successful. We need to give back something to the society. So, all the seven people, including the senior couple who became friends with us in Goa Express, felt really happy to be there. The nearby local market offered everything one would have liked to purchase. Around 10 a.m., we were free and decided to visit ShaniShinganapur, which is about 2.5 hours’ drive from Shirdi. Shani, the son of Sun God, is a famous deity in Shinganapur. A specialty of Shinganapur is that there are no locks in the houses and even at the offices in the area. People strongly believe that Shri Shani Dev protects people and their belongings from thieves.

After offering prayers at Shani Temple, we came back to Shirdi, planned to move to Nashik and Trimbakeshwar Shiva Temple the next day. State Transport charges are very nominal and one can even hire local taxis or cabs at very reasonable charges there. Mumbai, the financial capital of India, is also not far away. One can even plan for sight visits to the Ellora Caves but we preferred Nashik. Nashik is known for mythological, historical, social and cultural importance. The city is situated on the banks of the Godavari River, making it one of the holiest places for the Hindus. Sita Gupha, Panchvati is said to be the spot from where Goddess Sita was kidnapped by the demon, Ravana. Bhakti Dham and Mukti Dham Temple too are the places of attraction in Nashik. Although, there are many beautiful religious places in Nashik, but we had physical and time constraints. I can never forget this day because we were able to celebrate my son’s birthday in Nashik. Nashik has a rich historical past, as the mythology has it that Lord Rama made Nashik his abode during his 14 years in exile. At the same place, Lord Laxman cut the nose of “Shurpnakha” and thus this city was named as “Nashik”. We were fortunate to even visit Kapileswara Temple, the only Shiva temple that does not have the statue of Nandi. Nashik has some really mind-blowing landscapes and hills that you never would have imagined to have existed in this area. In the evening, we had to board our return train from Manmad Railway Station that was around 3.5 hours’ drive from the Godavari River. We felt sad as we never wanted to leave such a beautiful and peaceful place. Manmad Railway Station is a big and very busy railway station, but I think we should have opted for the small and peaceful Kopargaon Railway Station. Finally, we boarded our train back to Faridabad with memories one cannot ever forget. We always thank Shri Sai Baba for such a memorable trip. I hope to once again get an opportunity to visit this place. Om Sai Ram!