Home > Experiences > Zindagi Live > Republic Day greetings to one and all!!! 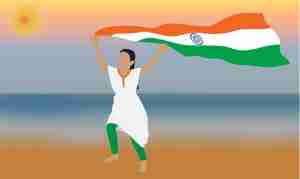 Trisha is a proud Indian. She becomes agitated when she reads or watches news of corruption, crime or dysfunctionality of the system. And she feels proud when she watches Republic Day parade on the television. She adores the ‘Tiranga,’ waving in full glory and gets emotional when she watches any patriotic movie or reads about out our martyrs. But she wasn’t like this always.

Remember that ‘The Neelam Show’ scene from the movie ‘Kuch Kuch Hota hai’ where the little Anjali asks SRK to play a game with her. The game was that SRK had to snap utter the first word that came to his mind after listening to the word Anjali threw at him. So going by the same rule if someone asks Trisha what Republic Day means to her, she would say ‘Constitution of India’ and if someone asks her small son he would reply ‘Flag hoisting,’ the two-worded synonym for Republic Day for him. However, there’s a huge difference in the ways Trisha would celebrate Republic Day in three different phases of her life and it cannot be summed in a couple of words.

Call it an exaggeration if you want, but Trisha was an all-rounder student right from day one of her formal schooling, except there was no informal schooling at that time, in the early 90s. So until she was a school student, Republic Day meant to her just another school programme, next to the Lohri celebration.

Trisha was one of the most sought after students for many activities. Dance, song, debates, sports almost anything. When she was in 5th or 6th standard her teachers took her team to perform at a district-level Republic Day programme where she and her team danced on a Himachali Song, “Chal meri gadiya mizrare mele, sogi sogi jana…” The meaning of the song is still a mystery for Trisha but she remembers it with its tune as if she listened to it yesterday itself. She doesn’t remember the sequence of the events that day but in her memories she could see herself doing the exact steps that her music teacher taught them. At that time, they had one music teacher and their PTI teacher would help the music teacher with musical performances. Their PTI teacher was a Himachali herself so she brought for them a traditional Himachali song and choreographed the song for them. By the way, this word ‘choreograph’ had not been added to Trisha’s dictionary back then.

…Another thing that she remembers from this time period is those ‘laddoos’ that they would get from school on Republic Day. More or less, all her Republic Days in school were like that, only the activity in which she participated changed.

From her college and post-grad days, she doesn’t have even a single memory of celebrating Republic Day with her friends. However, she does remember some Valentine Day celebrations.

Be it an MNC, a lala company, or a government office, your workplace makes it a point that Republic Day isn’t a regular day. And Trisha had always worked in MNCs so on January 25th, irrespective of the name of the MNC, Trisha’s office building would be decorated with balloons and frills, staff would be asked to wear ethnic clothes and they would have a party and play a few games. January 26th would be off so that would mean rest for her.

Now, Trisha has got a child who she needs to explain the relevance of the day.  She also needs to make a flag or some other things for his son’s school project, prepare him for a quiz or a drawing competition. .. This is the phase when suddenly for Trisha all the once-boring things turned into the most interesting things. She watches Republic Day parade with all the interest and immersion. She reads newspapers and magazines to know about the chief guest on Republic Day and which all malls and places are on high alert. She searches the Internet for more Republic Day stuff like inspirational stories, speeches and quotations by late Indian leaders. She takes her son to the market to buy him Republic Day merchandise, since he’s crazy about Indian National Flag. She understands now that for markets Republic Day has always been important, not so much for patriotism as for business. She shops online to get Republic Day discounts. She also takes her son to the pizza corner to redeem that buy one get one coupon. She watches the Republic Day special movie on TV with the family. Last, but not the least she fills her social networking pages with tri-color animations and patriotic messages.

How do you celebrate Republic Day?