The Letter vs. Cursive Letters

It was September 5th, the day we all observe as Teachers’ day that I had posted my 5-year-old son Ayaan’s hand-written letter to his teacher on FB. The letter was in cursive hand writing.  As happens usually on social media, a series of likes and comments followed. Whereas most of the comments that I got were more of compliments on his handwriting and how that letter was impressive as an expression of gratitude towards a teacher, there came one comment that was very different from all others.  One of my close friends Naina wrote about the elimination of cursive handwriting from school curriculum. While responding and chatting with her I realised something very important. So far, the comments that that FB post fetched were heart-warming compliments and being a proud mother I had been basking under their glory. But Naina’s comments made me come out of that ‘glorious’ zone and enter that of a custodian of my child’s educational needs. 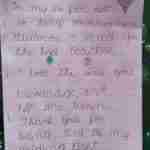 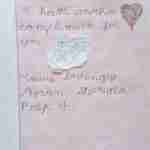 Naina told me that schools are planning to do away with the cursive way of writing English. I had an idea of it because last year, when I had told Ayaan’s teacher that I am introducing him to cursive letters at home she asked me not to because being a teacher the school authorities had intimated her of possible elimination of curlicue letters from the school’s curriculum. The base argument for the move is said to be that the kids would get confused between print letters that they see and read in books and magazines and the cursive letters that they would write; if only they’ll learn that is.

Well, at this juncture I felt what a super kid I was! I could read print letters and write cursive at the same time. Going by this logic, everyone who knows cursive handwriting is a super human whose mind can solve even the highest level of confusion – difference between cursive and print letters. But is this the only confusion that someone has to deal with from childhood to adulthood? Will the kids be really sorted if they are kept away from curls of cursive letters? Because, personally, form of letters have confused me the least. Rather, as a kid I was more sorted out. I would say a yes if I wanted to and a no if I wanted to. Whereas now, this apparently simplest of acts confuse me big time. As we grow, our confusions also grow and on the pettiest of matters we get confused such as which colour dress to choose, what to gift to choose for whom, what profession to choose, what excuse to make for saying a no, what’s right and what’s wrong for my kid etc.

Anyways, coming back from confusion to curriculum as the topic. So the intent with which Ayaan’s teacher and my friend informed me of the possible exclusion of cursive from the school syllabus was that I shouldn’t further put my and my son’s energies in learning it for they might get wasted. And to a large extent they’re right because parents might feel betrayed if they come to know what they have taught their kids isn’t going to be asked from him in school and he is not ever going to be ‘evaluated’ on that.

But this very thought made me wonder if being able to qualify an evaluation test is the complete purpose of education? And if education can ever be standardised in schools and educational institutions as per national and international norms?

It was almost instantly that I replied Naina that even if cursive form of writing is eliminated from schools of the world, I would be glad that my child knows it because then he will be one of those few people who know this beautiful art of making alphabets that might just extinct from students’ notebooks tomorrow. I was surprised, though, to know how the invincible form of writing during my schooling is being considered as a source of confusion for my kid’s generation. I may be criticised for being an old school girl but this is where the question of purpose of education arises. Can knowledge acquired be ever rendered wasted? Are the things taught in schools and the way they are taught there can only be called education?

Schools play a very crucial role in a child’s educational journey. Children learn to be disciplined there. It’s is school itself that they come to know what a teacher is. It’s is in school itself that children learn to voice their concerns and thoughts themselves because everywhere else they have their guardians doing it for them. So in that sense, they learn to be independent in schools. Schools provide children exposure to various fields be it sports, music, science or any other. The kind of variety in opportunities of learning schools and educational institutions provide, nowhere else do we find that.

However, we cannot and should not depend ONLY on schools for our child’s education. We might have standards of schools and standards in their curricula but what we can’t standardize is education. Education is something that has to be customised for every child at every stage of his life. Knowledge is indestructible. And knowledge includes learning as well as unlearning. Any form of knowledge gained, through any medium only helps but when and in what form might or might not be known immediately. 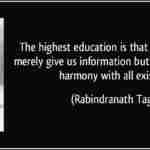 Gurudev Rabindrnath Tagore, the man who gave us our national anthem, loathed formal education and largely avoided classroom training. Albert Einstein went on to even say that ‘Education is what remains after one has forgotten what one has learnt in school.’ So much so that when he said ‘The only thing that interferes with my learning is my education,’ he actually differentiated education from learning. Rightly so, because even after getting same education, it’s a student’s learning that differentiates him from another and decides the path that he is going to take.

It can be debated if by teaching my son cursive letters when it’s not included in his school syllabus, have I wasted his 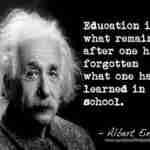 energies, have I done something not needed or have I added to his confusion? But the happiness that he got by writing a letter expressing his love for his teacher in his own handwriting is undisputable. Right now he doesn’t know why he has to learn the things that he learns but I hope someday he’s able to understand that education is all about perpetual learning and unlearning, whether or not included in the (limited) school curriculum.