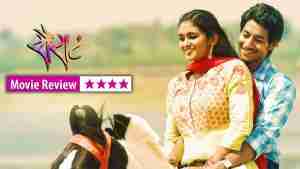 Nagaraj Manjule rocks!!! Who’s Nagaraj Manjule? Director and producer of the movie ‘Sairat.’ What kind of a movie it is? Well…here’ s an account.

Sairat is probably the first regional movie I saw and surely the first regional movie I saw without the subtitles. But to my amazement, I didn’t even feel the lack of translation. This certainly is the true test of an honest and successful art piece that it directly appeals to your sensibilities and you don’t need the crutches of language or grandeur to understand it. The movie so effortlessly brings out the beauty of love and ugliness of hatred and the caste system. Both the male and female protagonists might not fit in standard moulds for  a ‘heros’  and ‘heroines’  but they surely set new standards of romance. Manjule has successfully established that it doesn’t at all need wide arms, be it the signature step of SRK or the signature posture of the Titanic pair, to be romantic.

After watching Sairat, everyone will have their own conclusions/opinions but there’s one thing that I am sure will be common in all conclusions and that is it doesn’t need the ‘art movie’ tag or seasoned theatre artists to come up with an issue – based or serious cinema and that a movie doesn’t have to be brainless to be commercially successful . All it needs is a talented director and a powerful script and you’ll be glued to your seat for 2 hours 56 minutes without even realising it.

Sairat is about the horrific subject of honour killings that exist in all most every caste. The movie has a pair of teenage lovers from contrasting socio-economic backgrounds in a village of Maharashtra. Archana Patil (Archie), a rich, upper-caste girl from an influential family falls in love with this poor, low-caste boy, Prashant Kale (Prashya). Obviously the families when get to know disapprove of the affair and so the two young lovers have to flee away to live and lead a happy, married life. Might sound one but the execution is certainly anything but a cliché. The young lovers have to flee from a known, unaccepting rural society to an unknown, indifferent urban society. Somehow, after much struggle they find their ray of hope and cling on to it as long as they can but there’s a lot more to the movie.  And yes, the last scene will make your heart skip a beat!

The core issue of course being honour killings, some other deep-rooted societal dysfunctions are also skilfully brought forward. For example there’s a sequence where Archana’s brother slaps his teacher when the teacher asks him to stop talking on mobile phone while the class is going on. Needless to explain that he dares to do so since he belongs to a politically influential family.

The characters of both Archana and Prashant evolve so beautifully that it cannot happen that you don’t get transported to the times of your own teenage love. Archie fits the description of  ‘Jugni’ given in the song by the same name sung by Mika at the end of ‘Tanu weds Manu.’ Remember the lyrics say

On the other hand, Prashant is shown to be a bit of shy but bright, hard-working boy who’s also the captain of the Cricket team of his area. So, basically both the characters have all the qualities needed to be a cool ‘filmi yet real’ teenager.

Since already praised it so liberally, would contain further verboseness and would just say music is soulful, delightful, melodious everything. Just like expression of any kind, music too is least dependent on words to penetrate. Not only the music, the videos too are beautifully directed with an overt use of slow motion, though. However, you’ll love the slow-motion sequences because sans those you would have missed the subtle expressions of Archie and Prashya. After all, it is these expressions that make the videos magical.  My personal favourite is ‘Sairat zhaala ji.’