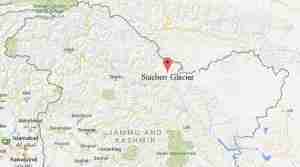 “What’s in a name? That which we call a rose

By any other name would smell as sweet.”

Here in question we have a glacier called ‘Siachen,’ which is considered to be uninhabitable and what’s all more interesting is the meaning of its name – `the place of wild roses.’ Quite ironical, isn’t it? However, even if its name or meaning of the name was something else, it would still be equally disputable.

All the facts around Siachen are astounding but more than the nature, it’s we humans who are responsible for its notoriety. Of all such facts, the most significant is that it’s located in the eastern Karakoram range in the Himalayas at about 35.421226°N 77.109540°E, just northeast of the point NJ9842.

Now this figure NJ9842 is the bone of contention because it is the point where the Line of control between India and Pakistan ends leaving the area beyond that for claims by both the sides.

Until 1984, both the countries believed this terrain to be uninhabitable for human beings. But in the 1970s and early 1980s, the Pakistan government started permitting several mountaineering expeditions on the glacier, which was seen as a strategic threat and an attempt to reinforce their claim on the area. When the Indian forces became aware of this, it launched operation Meghdoot on 13 April 1984 to capture Siachen. The military action resulted in Indian troops gaining control of the entire Siachen Glacier.

Post the operation, Pakistan launched two all-out assaults in 1987 and again in 1989 to capture the ridge and passes held by India.

Result of the first assault

Pakistan initially managed to capture a few high points but was eventually pushed back. Later that year, Pakistan lost at least one of its major posts – Quaid to India. The post was renamed as the Bana Post in recognition of Bana Singh who launched a daring daylight attack. Bana Post, at a height of 22,143 feet above sea level, is the highest battlefield post in the world today.

Result of the second assault

The second assault also did not yield any fruit to Pakistan as the ground positions did not alter.

The Indian Army has control over some of the top-most heights which gives it the tactical advantage of high ground. However, Pakistan army has control of Gyong La pass due to which Indian access to K-2 and other surrounding peaks has been blocked effectively. And mountaineering expeditions to these peaks can be done with the approval of the Government of Pakistan. The situation is such that Pakistanis cannot get up to the glacier, while the Indians cannot come down.

Presently, India holds two-thirds of the glacier and commands two of the three passes including the highest motorable pass – Khardungla Pass.

Both the countries pay a huge cost on Siachen. It takes crores of rupees per day (India spends around 5- 7 crores per day to keep forces stationed at the glacier and that comes out to be around 20,000 INR per second) and most importantly lives of thousands of soldiers to keep it going.

The recent tragedy being of February 3 when a huge ice wall crashed and fell over the prefabricated outpost building of Indian forces, situated at a height of 19,600 feet on the upper part of the Siachen glacier where 10 army personnel were stationed including Lance Naik Hanumanthappa Koppad.  On February 4, a defense spokesperson had said that the chance of finding anyone alive was “very remote” and later, the Indian Army had declared them presumed dead.  Because they were talking about people who were buried under tonnes of ice at 19,500 feet where temperatures range between minus 42 and minus 25 degrees Celsius.

It took more than 150 trained and acclimatized Army troops, specialized dogs, specialized digging and boring equipment, deep penetration radars, capable of detecting metallic objects and heat signatures at a depth of 20 meters, and radio signal detectors, to carry on round-the-clock rescue operations in such severest of the severe weather conditions where average day temperatures are minus 30 degrees Celsius and night temperature fall below minus 55 degrees.

Cheetahs and Cheetals are the only type of helicopters that have high altitude operational capabilities and can fly at an altitude even beyond 20,000 feet above the sea level. Just like human beings, these machines are also pushed well beyond their limits.

The strategic and economic significance of the Siachen glacier has always been questioned by military experts and peace activists. They say that the toll it exacts in men and finances is just not justified. Stephen Cohen of Brookings Institute described it as “two bald men fighting for a comb”

Miraculous as it was, Lance Naik Hanumanthappa Koppad was rescued alive from under 35 feet of snow in -45°C five days after the avalanche struck the Indian Army post in Siachen at an altitude of 19,600 feet. The news came after the authorities gave up hope of rescuing any of ten soldiers on duty and declared them dead. More miraculous would be the ending of the tension between the two nations over Siachen.

This silent mass of ice was once standing undisturbed before the military camps were established there. Now when its silence has been encroached upon by routine chemical blasts, non-biodegradable waste dump and other such activities by the military troops, it has started responding in frequent avalanches and crevasses. Global warming combined with the activities of military troops have an adverse effect on the ecosystem of the region.

This ‘place of wild roses’ is a place where life is anything but a bed of roses. Every minute, hundreds of soldiers, pilots and rescue teams struggle for their lives. There hasn’t been any reliable data available on the exact total number of lives lost in Siachen so far but one fact has been established that almost all of the casualties on both sides have been due to extreme weather conditions. It’s more of the ego of the two nations than the imperativeness of the stationing of their troops that’s increasing the death toll and disturbing the ecological balance of the area.

It’s strange. When kids fight over anything, elders intervene and suggest that fighting is not right. They tell us that we must learn to share and live peacefully. They tell us about how human beings are superiorly different than other species on the planet. Kids are also told that humanity is all about preserving love in hearts and nurturing friendship in life, not fighting.

But when the kids grow up, they find that the rules have changed. With every step forward, competition increases and when it comes to people as nations it turns into a fierce fight or war. Then, winning becomes the only important thing. Nations are allowed to wage wars against each other over lands, waters, skies, glaciers, resources or simply egos. It’s only because of such fights that a technically uninhabitable extended mass of ice bags the title of highest and coldest battleground on Earth.

May be its Siachen’s way of saying ‘Stop disturbing me. Stop fighting over me.’