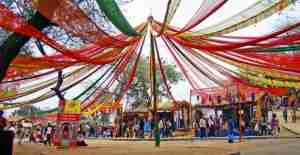 The Surajkund crafts mela is organized every year in Surajkund, Haryana, near Delhi, by the Haryana Tourism Department to promote handicrafts. It was started in 1987 and has entered in the 30th year this year. Traditional craftsmen including sculptors, painters, artists, and weavers from all parts of the country participate in this annual celebration. However, in 2013 the fair was upgraded to the international level and in 2015 and as many as 20 countries participated.

Those who have been to the mela would have their own experiences and may share those. Here’s my personal account of the 30th Surajkund Crafts mela, 2016.

Why should you go to the mela? 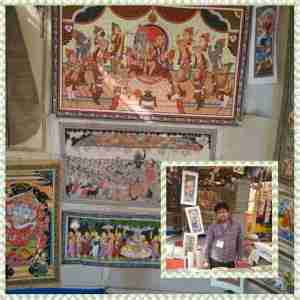 Handicrafts are expensive and rightly so considering an artist spends weeks and months over a single piece. I happened to meet artisan and seller Binay Kumar from Odisha. When I enquired about a small piece of the patrachitra (painting on the Palm leaf) in his stall he answered 5000 INR. “When I asked why so expensive? “He said, “It took him a month to complete that particular artwork.” I was amazed to know that he is an awardee of a national award in painting for his work from our loved, late president Dr. APJ Abdul Kalam.

And I am sure he was not the only artist with such kind of an achievement in the mela. 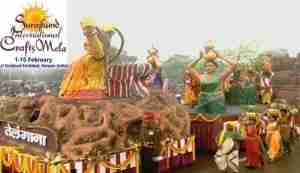 This can be a trip full of infotainment for you and your kid. You can tell your kid about different states and their cultures, especially about the theme state. Like for example this time around, the theme state was Telangana. Telangana is famous for its art forms and crafts including Cheriyal scroll paintings, Pembarti sheet metal, Nirmal paintings, Dokra metal crafts, Pochampally ikat sarees and many more. 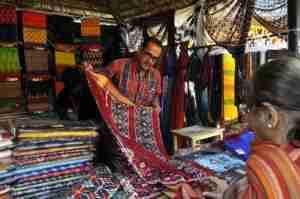 You’ll learn difference between sale/discount and a bargain. I’ll explain how. My neighbour bought a carpet from the mela. The seller quoted the price 12000/- and straight away offered 3000/- discount, which brought the price to 9000/-. This was a deal. But my neighbour convinced the seller to give that particular carpet for 5000 INR. This is called bargaining. The buyer is happy that she got it at her favourite price. The seller is proud that he still saved his profit margin. 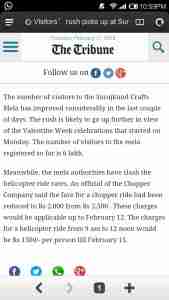 If shopping, colours and crafts, all fail to attract you, there’s something else too and that’s helicopter ride. I’ve a story for this one as well. I knew through hearsay that this time the charges for chopper is 2500/- per person for five minutes. (Last year it was 2000/-) Luckily, I got to read what was published in the Tribune about it. Here’s it. (screenshot)

But when I, together with my family, went there the person giving the tickets said the ride is for 2500 only. No discounts were being offered. We felt cheated. It wasn’t only us, there were other people also who came after the reading in the Tribune that if they reach by 12 there, they could get the ride for 1500. The argument given by the chopper company was that they thought of giving this discount but then entertainment tax was levied on them so they had to withdraw the offer and by the time they could update this information, the news had already been published in the newspaper.

The argument was lame because the public shouldn’t be left to bear the burden of misinformation and couldn’t be compensated with simply the reason of doing so. But we still went ahead for the ride since we’had promised our son who’s all 4.5 . 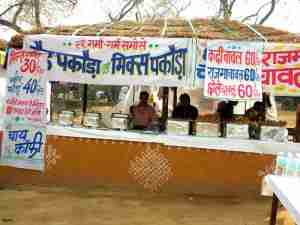 The mela has a food court full of regional, national and international cuisines. Be it Rajasthan’s dal baati churma, Kashmir’s dum aaloo or Italian pizza. You’ll find a majority of snacks and savouries liked by foodies across India. These days more and more people are turning health conscious and reducing the intake of fizzy drinks. So those who don’t like cola much, can have the alternatives such as hot milk and jaljeera. 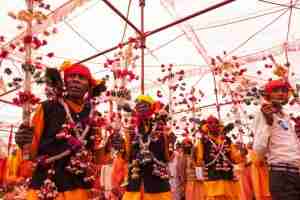 The mela also features performances of folk artists. To enliven the mood of visitors, national and international cultural artistes including singers, musicians and poets present various cultural performances at the open air ‘Chaupal’ within the mela ground during the mela fortnight.

A number of competitions for school and college students are held during the Mela. A separate section is earmarked for amusement and adventure activities for all age groups.

Who shouldn’t go there?

Other than these, anyone can go including the ones who have been to the mela multiple times only to observe and conclude that ‘there was nothing new this time also.’

How to reach (courtesy Haryana Tourism)

Surajkund is a 35 minute drive from the Indira Gandhi International airport and 25 kms. from Palam airport.

Delhi is the nearest railway junction. Faridabad and Gurgaon are both linked to Delhi via railway lines. From each of these stations, one can travel to Surajkund by car/cab or tourist coach.

Surajkund is well-connected to Delhi, Gurgaon and Faridabad by metalled road approachable by one’s own or hired conveyance.

Note: The images used are for representational purpose only and are copyrighted to their rightful owners.