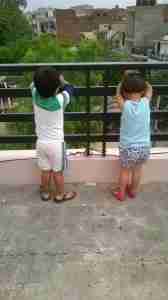 When you raise a kid all on your own, you are going to experience two things for sure. The most difficult times and the most fun times. The last experience I shared in the blog ‘How Not to bring up a kid,’ talked about the former and this one is about the latter. Sorry for not keeping any climax but I hope reading the following experiences will leave a smile on your face.

Daily evening, my son Ayaan (4+) plays with his lane friends. I don’t allow him to ride bicycle or to go to other lanes, despite being in a gated society with guards in each lane. Most of the parents of kids of this age group don’t allow it because the kids are not that mature enough to take care of themselves and going to some other lane means going away from parents’ supervision. I have made this thing pretty clear in Ayaan’s head. I also keep a regular check on him to ensure that they doesn’t slip away. But the other day, he did. And it was only the next day that I got to know that Ayaan along with his friend Akshat went to the third lane from ours. I got furious and worried on their dare. I talked to Ayaan. I said, “You went to the other lane even when I had warned you not to? You didn’t even tell me!” He said, “Akshat and I went because we wanted to know where Angel lives. We asked everybody but they said Angel doesn’t live here. You said she lives in the third lane.” Angel is another kid in our society who’s in the same school as Ayaan. However, Ayaan has only lately discovered that Angel lives in our society itself. It was on the day when she and her mom had visited us and the kids had a gala time playing with each other. Ayaan inquired to me the other day, “Will Angel be visiting us today as well?” I simply said, “No.” He said, “Where does she live?” I said, “In the other lane.” And two day after this dialogue the boy actually went to find her out. I said, “I’ll invite Angel and her mom very soon but you don’t have to go personally to find her out. You’re small and small kids aren’t allowed to go beyond their own lane.” When Akshat’s mom found that out she said that the boys have already started following girls…..

….Ayaan is so fond of Aeroplanes and helicopters that my family and I want to believe that he wishes to be a pilot someday. We’ve kind of put this thing into his mind also that okay you love planes so might just want to fly them someday and you can do that if you’re a pilot and he also very excitedly says, “Yes, I’ll be pilot.” And when he says so our hearts swell with pride already and he could sense that. Ergo, his face beams with happiness and proud.

Now what happens is whenever he shies away from doing his homework we say, “C’mon son. How would you be a pilot if you don’t study? You need to study daily and study hard if you wish to be a pilot.” This actually worked. But just for some days. Now, I don’t know where has he learnt that from but when we ask him to study so that he becomes a pilot, he says, “I want to be a film hero like Varun Dhawan.”