Home > Experiences > The Window: A Thought 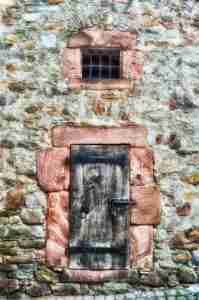 By Procheta Banerji Chatterjee
There is something about unmaintained things. They have an inexplicable charm that pulls you towards them despite the not-so-attractive surface. Take old buildings, for example. It transports one to times when outer polish did not matter, when things had a soul of their own and replacing an old refrigerator with a new one was a heartbreaking phenomenon because of the memories attached to it. Everyday while going to work I drive across a cluster of very old DDA flats with pale yellow algae smeared paint and unkempt windows and doors. But one window in particular catches my attention. Though the encounter is just seconds long, I keep visualising it long after I reach office and until I read my first mail. But today, the mails too could not distract me from its haunting presence. The rusted frames and the foggy glasses must have witnessed so many life events. It must have been caressed by the soft hands of a two-year-old child defying repeated warnings to not go near it. But still, like a stubborn lover, it would have found its way to the rectangular opening in the restricting structure. It must have been the only connect between the inner and the outer world for an old man who could not walk. It must have plated interesting visuals to this man in his bland existence. Every morning it must have been opened for a breath of fresh air and closed at night to keep away the thieves and the chilled air. Someone with an artistic bent of mind would have leaned against it and thought of mesmerising poetic couplets. So much must have gone around it, and it would have stood there for ages like a silent observer. No one would have acknowledged its presence with a conscious mind. It would have received extraordinary attention whenever any part of it broke or chipped. Then, depending on the financial situation of the inhabitants of the flat, it would have received an immediate fix or would have been left injured till the next pay-day. Sometimes, its existence would have been questioned by an incoming family. The window would have shivered when questions pertaining to privacy and security would have been raised and explored. It would have listened eagerly to the arguments in its favour and patiently waited for the verdict to change in the light of any fresh argument. Then, there would have been the festivities. Couples would have fought childishly over the kind of makeover the window would get before Diwali or Durga Puja or Onam. It would have brimmed with joy to see the can of paint and the paint brushes. It would have felt pity for the child who would have received a thrashing for writing gibberish on the window glasses. For lovers, the window would have been a gateway between two worlds. It would have been the only bridge connecting the real and the surreal. Lovers’ eyes would have met through it and lovers would have waited outside it to catch a glimpse of their beloved. So, it stands there, surviving the test of time. And now when I see it for seconds while crossing over the flyover in my car, I too become a character in the story of its life.