I saw the movie ‘Titanic’ for the first time when I was in school in class XI or XII. I am not sure. I saw Titanic the movie first and then read about it in my English textbook. So, not much about its grandeur and devastation was left to my imagination. But that didn’t matter because Titanic has never really seized to transfix me since that first time I got to know about it. And that’s the reason I’ve always watched Titanic the movie when it airs on any television channel.

I have had crush on Jack and on Leronardo De Caprio separately, I have had admired Rose, I have had loathed Cal, I have had reverenced Captain Smith. In fact, I’ve had one exclusive emotion for each and every character in the movie from the protagonists to that poor mom who had to put her kids to sleep upon realising that death was inevitable now. Believing in death is believing in God and who else could be a greater believer than a poor mother who knows she couldn’t be able to save her children’s lives and prepares them for the life after life.
But when I saw the movie Titanic the nth time a few days back, it seemed to reveal to me more secrets of it, of life. Or maybe it has always been communicating the message but I’ve been able to decode it only now – Titanic was meant to sink. Collision with the iceberg was only an excuse. Overburdened it always was of human ambitions, ego, narcissism, arrogance, dysfunctional structure and a lot more such as the following.

1. The story of Titanic shows that all that gleam surrounding sophistication seem to be withering away on a mere mention of liberation. Rose chose Jack over Cal because Jack let her be herself without really demanding her to carry the ‘burden of being a lady’. You may choose to be yourself or to fit in that mould of perfection created by the society for each one of us, which by the way is no more real than a mirage. And it is your choice that decides how you are going to spend your life: frugally or generously. Life, however, has a certain equation. It is inversely proportionate to material wealth. The more generous you are in leading life, the more life you are going to live per moment. Whereas, the more you’re in the race of hoarding material wealth the more you’re going to miss moments and lose on life.

2. Titanic further highlights an irony i.e. whereas, it is a boy who has to take forward his family name, it is a girl on whose shoulders there’s the burden of keeping high the honour and dignity a family. This holds true for both the East and the West. Had it not been the case Rose’s mother wouldn’t have said “Of course it’s unfair. We’re women. Our choices are never easy.” The story of Titanic indicates that you are going to get a fuller picture of life and society only when you see it from a woman’s point of view. There’s a world inside this world which is known only to women.

3. We humans being the most intelligent creation of God may take pride in our ability to plan, prepare and plot. But the proof in the form of history says otherwise. Our planning is our illusion. We couldn’t and we can’t really ‘prepare’ ourselves for future, especially when our plans aren’t in sync with Mother Nature who doesn’t really like the word impossible. As far as project titanic is concerned, it went on to rather challenge nature. Had it not been the case, Rose’s fiancé Cal Hockley wouldn’t have said ‘It is unsinkable. God himself could not sink this ship.’ Nature had just asked in her own way ‘Really?’

4. There’s a scene in the movie where Cal tries to bribe an officer to buy a seat in one of the life boats, which were meant to be exclusively for women and children. This shows that even in the middle of the sea on a sinking ship when death was just moments away, corruption didn’t seize to exist. It established the fact that corruption isn’t any kind of a result of our actions or product of malfunctioning of one or more systems, rather it is the very part of our tendency, human tendency. Corruption is nothing but another level of selfishness. It finds its way even in the most desperate and unfortunate times.

5. Titanic shows that the poor always figures last in any list and is given the last preference. The poor has no right to live or die with dignity. He only has to dwell on leftovers. Leftovers of food, clothes, resources and even chances to survive. Had it not been the case, this truth wouldn’t have existed. Titanicfacts.net says that the Lifeboat No. 1 only carried 12 people, 5 first-class passengers (including Sir Cosmo and Lady Lucy Duff Gordon) and 7 crew members, despite its capacity of accommodating 65. This boat was named the ‘Millionaire’s Boat’ by the press, who accused the occupants of ignoring cries for help from people in the water.
Beautiful fades but beauty doesn’t. Titanic, the ship, dooms but Titanic, the film, rises to unprecedented levels success. The movie costed more than Titanic itself. In 1997, it costed 200 million. If Titanic was to be constructed it would have costed 150 million dollars.

Collision with the iceberg was the final nail in the coffin, her fate had already been decided with its inception as ‘the unsinkable.’ 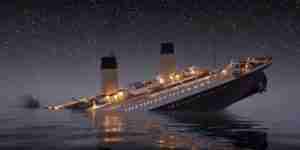