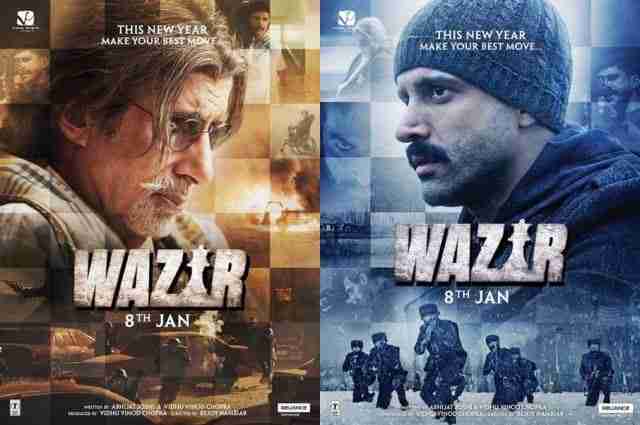 I had decided to watch ‘Wazir’ when I first saw its trailer a few months back. The on-screen presence of two strong actors Amitabh Bachchan and Farhaan Akhtar, the banner of Vidhu Vinod Chopra and the direction of Bejoy Nambiar made it a must-watch for me.

With the characters of an ATS officer and a chess master in the lead roles there’s no chance of the movie being of any genre other than suspense/thriller.  When I watched the trailer, I thought I already know who the ‘wazir’ will be in the movie. Who it could be other than the muscular, gym-trained Farhaan? Obviously not the wheelchair-bound, paraplegic chess master Bachchan. But in the full-length movie, the entire suspense is revolving the character of ‘Wazir.’

In this hardly over 1.5-hour movie, not much of time is wasted in exhibiting unnecessary moments of intimacy between Danish (Farhaan) and Ruhana (Aditi Rao Hydari). The romantic song ‘Tere bin’ is aptly used to display most of the romantic moments with precision and at the same time with tenderness. Rest of the time allows the story to develop with a moderate pace, which could have been a bit better.  Music is versatile, situational and soulful. It is bound to be when you have an album that has singers like Sonu Nigam, Shreya Ghoshal, Ankit Tiwari, Javed Ali and Prashant Pillai, even Amitabh Bachchan and Farhaan Akhtar.

Performances are extremely impressive. Bachchan after hundreds of movies can still put you in awe of him and Farhaan, though not as many films old as Bachchan, seem to be setting new standards for himself with each passing movie. Manav Kaul again proves his mettle in a negative role after ‘CityLights’. You’ll also have Neil Nitin Mukesh and John Abraham in cameo roles. Aditi Rao Hydari has more to talk with expressions than with dialogues.

Dialogues are meaningful. Story is gripping. It’s about Danish (Farhaan) an ATS officer who happen to meet by accident Chess master Pandit Omkarnath Dhar (Bachchan). Danish learns from Panditji the chess moves and they both share what they have in common – their griefs. Thereon, they start to live the chess moves and life becomes a game of chess for them.

Even if ‘Wazir’ isn’t an edge-of-the-seat thriller, it definitely is not-to-be-missed movie for it keeps you guessing till the very last scene who the ‘Wazir’ is.